The Rustbucket Small Command Pod is a module in Lightspeed Frontier.

When starting a new game the player always starts in this pod along with the other starter modules.

- The pod was one of the first ship modules to be added into the game and the current 3D module still resembles the initial placeholder visuals.

- A development image exists of the supposed internal structure of this pod, which suggests most of the other pods and habitation modules are two-storey as well: 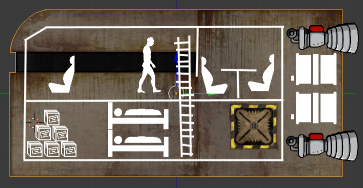